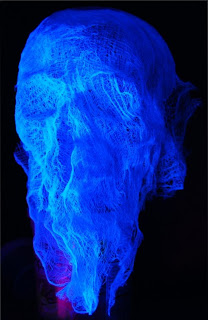 I am a home haunter, which means I have the house all decked out for Halloween. I started focusing on a new theme this year, ghosts, and now I have decided to stay with that theme and see how far I can take cheese cloth and black lights.

I have to give credit to Phantasmechanics for the original Flying Crank Ghost (http://www.phantasmechanics.com/), and for me at least the idea of making a moving ghost out of cheese cloth and sticking it under a black light. My original FCG has served me well for 4 Halloweens, but now it is time for something more. I will post ideas, experiments and ghosts here as I go along. Blogging is new for me, so the ghosts will not be the only things learning as they go along.

First experiment, forming cheese clothe using paper mache glue, while retaining that nice blue glow in a black light. I used a life size plastic skull I picked up at K-Mart last year (thanks to Dr. Morbius for letting me know about deal on these at K-Mart) as a base, then layered cheese cloth on the skull and applied paper mache glue (mix of elmers and water). I tried applying polyeurathane to the first one, and it really degraded the black light effect. The second one, without any polyeurathane is show to the left. I would like to extend this idea to include a textured hood, along with some reenforcement inside so these could be used as the head in ghost props.

Posted by heresjohnny at 9:49 PM